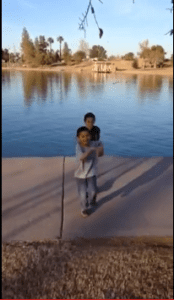 About a year and a half ago, my daughter, her husband and their combined 5 kids moved from the high-desert wasteland of northern Nevada to my community near Phoenix Arizona.

My daughter and her husband have achieved so much in the past 19 months, and I’m very proud of them for having the courage to make drastic changes from their “normal” life in Nevada that have been, at times, very difficult, but have given the family a wonderful “new normal”.

My youngest grandchild, Xavier, was born prematurely, and this smart, cute-as-a-button, energetic 6 year-old boy has the lungs of a 3-year old.

He has suffered from asthma his entire life, and a few months ago had a life-threatening attack where he stopped breathing and turned blue.

We almost lost him.

Thanks to the exceptional staff at Banner Desert Children’s hospital, Xavier received the top-notch care that saved his life and started him on a journey that the doctors say will lead him to a quality of life that most of us take for granted.

Check out this video of Xavier and Justin enjoying one of the simple things in life that most of us take for granted.

For most of us, “normal” is like oxygen — we don’t miss it until it’s gone!

What are some “normal” aspects of your life that you’d truly miss if you didn’t have them anymore?

With his lifetime history of asthma, “normal” for Xavier and his family was to hold the belief that he’d never be able to join his brother and 3 sisters who all play sports like soccer, softball and football.

Xavier told his dad that he wanted to take up fishing for his sport.

For most of us, the image of fishing is quite serene, with much of the time spent patiently waiting for something to happen.

I gave Xavier and his 7-year old brother, Justin, fishing gear for Christmas, and the first week of January, I took the boys fishing for the first time.

They were excited to go fishing, but the “patience”  and “serenity” parts didn’t last long, and the fish weren’t biting anyway, so the boys found some other things to do.

Now, there’s nothing remarkable about this cute video, except that a few months ago, this simple act of running down a hill and just being a normal kid was impossible for Xavier, and if he still lived in rural Nevada, I can only imagine ….. Xavier and his family are taking actions that create for them a “new normal”.

The process isn’t always easy, but the actions produce results that are truly remarkable.

I guess that’s the point of this post:  we take for granted that our “normal” is the way things are, but we really do have the power to take action to create a “new normal” if we’re not satisfied with the current “normal”.

The three of us had a great time that day, and we created a shared memory that will live forever.

I’m grateful that Xavier’s parents had the courage to take action and follow through on the changes that have begun an exciting process to create a new normal, after all, nothing changes if nothing changes.

What are some aspects of your “normal” life that you’d like to change this year?

Let us know in the comments below!