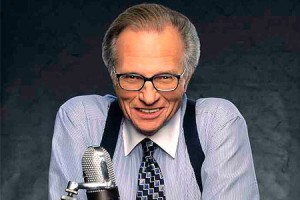 to say.  His answers were based on what he’d learned over his career interviewing the most interesting and successful people in the world on his show, Larry King Live.

There is one item that stuck out to me and is so simple to implement that it is most often overlooked.  This single thing is quite likely responsible for more failures in sales and general business than any other thing in history.  The first few words that were given to Larry were “I never learned…..”.  Larry King finished that sentence by saying “I never learned anything while I was talking.”

Wow.  Simple and profound.  How often have we seen a glimmer of interest in our prospect or customer and proceeded to launch right in to an in depth explanation of the details?

We’ve all heard it before.  “God gave you two ears and one mouth for a reason.”  Listen twice as much and talk half a much.  If I think back to my own sales experience, I laugh.  There are so many times that I know I talked my customer right out of the sale.  I gave them too many things to think about.  I brought up objections for them that they may never had brought up on their own.  I learned over time to clarify through asking questions and listening closely for clues as to whether they were ready to buy.

As I’ve spent countless hours in sales presentations training other sales professionals on the art of closing the sale, I’ve noticed this tendency to be the single most important and glaring deficiency of all.  It becomes almost painful watching a presentation go awry due to an overzealous presenter who wants to show all of the whosits and whatsits of whatever it is that they are selling.  When we leave the presentation and go over the details, I constantly reiterate the same thing.

Here’s the answer to the $64,000 question that I posed in the title of this article:

If the customer shows interest in your product or service, ask them what they like best about it and sit and listen to them.  Let them talk themselves into the sale.  Most motivated buyers of a product or service wouldn’t be out looking for it in the marketplace if they didn’t have an intention to buy.  If you have a quality product or service that matches what they are looking for, they’ll likely buy from you…..unless they feel like they’re getting “sold”.   You avoid them feeling that way and achieve the same end result by finding out their interest and then letting them expand on those interests until they have obviously convinced themselves that they should buy and buy right now!