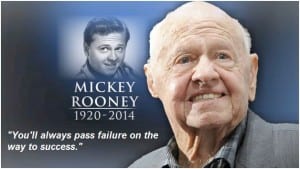 Mickey Rooney died recently.  His career began in 1927 at the age of seven and spanned 8 decades.  He appeared in over 250 films, on Broadway stages and television.  He was married and divorced 8 times, battled with alcohol and drugs, experienced both personal and professional bankruptcy and other calamities that would have been good excuses for most people to just give up.

I have always had an affinity for Mickey Rooney.  At a modest 5′ 3″ tall, his unprecedented career and fascinating life gave him an incredible story, which, at a modest 5′ 4″ on my best days, I can truly appreciate.

“Mickey Rooney got all the best babes despite being short as hell. #RIP beautiful man.”

We all have good days and bad days, periods of being in the flow and periods of being in a slump.  Getting through the tough times requires perseverance and commitment — excuses breed complacency and serve to rationalize one’s own perception of their own inadequacies, whether real or imagined.

Mickey Rooney passed failure numerous times on his way to multiple successes.  He was not one to make excuses, and for that, I admire him.

We all have “poor me” moments from time to time.  Nick Vujicic doesn’t make excuses, even though he has no arms and no legs.

Keep this video handy, and any time that you find yourself in a “poor me” moment, or contemplate giving up and rationalizing failure with excuses, watch this inspirational video of a truly astonishing man.

“It’s a lie to think that you’re not good enough!”

We hear 3 basic excuses about why people DO NOT have an effective social media marketing strategy in place:

MySMARTblog totally eliminates these excuses.  Check out how our automated social media marketing machine makes you look like a million bucks online, drives more repeat and referral business, and leaves you free to do the things that you do best.  And the cost?  It’s less than one Starbuck’s per day!