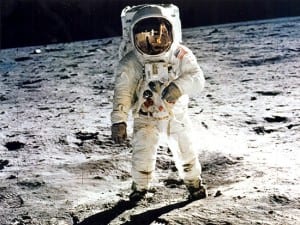 “If something is not impossible,

then there must be a way to do it.”

I remember watching the first space flight that landed humans on the moon. If you were alive in 1969 when Neil Armstrong captured this image of Buzz Aldrin, you probably remember this event, too (if you were at least 5-6 years old!).

Prior to July 20, 1969 the feat seemed impossible. Still, human ingenuity and determination proved several times that President Kennedy’s goal of putting a man on the moon and returning him safely was indeed possible.

We’ve all heard the names of the Apollo 11 crew, Neil Armstrong, Buzz Aldrin and Michael Collins, but have you ever heard of Nicholas Winton?

Honestly, I had not heard of him until I found the quote above and then I read his true story and watched this short video:

In 1939, at just 29 years old, Nicholas Winton coordinated efforts to rescue 669 mostly Jewish children from the Nazis in German-occupied Czechoslovakia. How did he accomplish this seemingly impossible feat? He relied upon his motto:

“If something is not impossible, then there must be a way to do it.”

We all find ourselves facing seemingly impossible obstacles from time to time. I really like Sir Winton’s motto, and I’m working at making this motto my own!

What is your strategy for dealing with insurmountable tasks?

If an effective and affordable social media strategy seems impossible to you, MySMARTblog has “a way to do it.” The three biggest reasons that we hear over and over about why people don’t have a significant social media presents are that they don’t have the expertise, the time or the money.

Register for our next FREE LIVE TRAINING and we’ll show you that social media is not only possible, but that MySMARTblog is a simple and affordable solution to keeping you in front of your most important people — automatically!