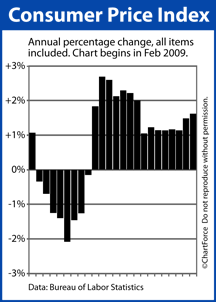 Mortgage rates are up 0.875% since mid-November, causing home buyer purchasing power across Portland to fall more than 10 percent since.

Persistent concerns over inflation are a major reason why and this week’s Consumer Price Index did little to quell fears. CPI rose for the third straight month last month.

Wall Street was not surprised.

As the economy has picked up steam since late-2010, the Federal Reserve has held the Fed Funds Rate near zero percent, and kept its $600 billion bond plan moving forward. The Fed believes this is necessary to support the economy in the near-term.

Over the long-term, however, Wall Street worries that these programs may cause the economy may expand too far, too fast, and into runaway inflation.

Inflation is an economic concept; defined as when a currency loses its value.  Something that used to cost $1.00 now costs $1.05, for example. It’s not that the goods themselves are more expensive, per se. It’s that the money used to buy the goods is worth less.

Because of inflation, it takes more money to buy the same amount of product.

This is a big deal in the mortgage markets because mortgage rates come from the price of mortgage bonds, and mortgage bonds are denominated, bought, and sold in U.S. dollars. When inflation in present, the dollar loses its value and, therefore, so do mortgage bonds.

Inflation fears are harming Washington home buyers. The Cost of Living has reached a record level, surpassing the former peak set in July 2008. Mortgage rates would be rising more right now if not for the Middle East unrest.

So long as inflation concerns persist, mortgage rates should trend higher over the next few quarters. If you’re wondering whether to lock or float your mortgage rate, consider locking today’s sure thing.